Attached is a report of the Ladies Evening League matches.

To read about our various teams and the matches played please see the attached.

Please find below and update of team results as reported by John Fromings:

The Scratch Team ended up finishing 3rd in div 3, 2 points behind Saddleworth in second place just missing out on promotion. Needing 8-0 on the final week at home to Crow Nest they won 6-2.
Ben reports:
“A great effort by all who played for me this year please tell the committee I am chuffed with the season and many thanks to who played for me; Aaron Schnacke, Daniel Moville, Philip Fullwood, Adam Taylor, Jack Pearcey, Martin Shaw and myself.”

Unfortunately not a good year for the team.

As a consequence, unfortunately, they have been relegated to Division 3 for next season.

Roger reports that they finished 4th in their division (D) and will be in Section B next year.

This is promotion for the club to section C. We will be playing the following in 2020:

Thank you to all the Rabbits members who give up their time and support. Well done to:

Please see below for an update of results from most club matches as reported by John Fromings.

The first match of 2019 was the 21st April at Fixby on one of the hottest Easter Sundays in years. The team was Pam, Jean and Annette Bird. Unfortunately we lost 2 games to 1.

The second match on the 28th April was away at Hallamshire, a lovely course in Sheffield. The day started well with bacon rolls and coffee but all matches were lost by Linda, Lucie and Sue.

On the 18th May we played at home against Fixby and won all 3 games. Well done to Pam, Sarah and Annette Bird.

On Saturday 8th June we played a very wet game at home against Hallamshire. Unfortunately, Lucie, Linda and Sarah lost 2 games to one.

We played our first Evening League match of the season at Bradley Hall on 22nd May. It was a fine evening, if a little cool. Our team of three was, Lucie Hallas, Pam Flaherty, and Nancy Willingham. Lucie, played against a lady who played off 19, so had to give her 7 shots. Lucie won 2 and 1, a great result. Pam was out next and had to give a whopping 12 shots. The game was always close, and it was all square after 17 holes. Both drives on the eighteenth fell short of the green, and both ladies chipped up for a putt. The Bradley Hall lady was down for four and Pam sunk her putt for three, winning the hole and the game. Nancy, received 2 shots, but struggled with reading the course, and lost her game. It was a good evening , and a win 2 – 1. Well done ladies.

The next match is on the 9th July.

Here are the results so far:

Here are the Winter League positions and points so far:

The results from last Friday are:

Here is the Super Six table:

The results from Friday 26th October are:

The table so far is below:

Congratulations to Graham Hunt and Sue Malins who were the overall Gents and Ladies winners.  Other winners on the day included:

Here are the latest results: 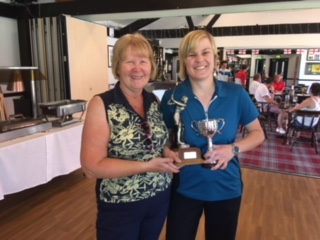 Here are the Ladies results:

Please see the attached for all the results so far:

We played the Rabbits return match at Saddleworth on the 30 May.

This how we stand in Section D of the League as at the 11 June:

Here are the results of the competitin. Well done to the winners.

The Rabbits and Ladies made the most of the lovely sunny weather for the
Rabbits/Ladies Greensome on the 25thMarch.
Ten pairs took part, including two juniors. Considering some competitors were
brushing the cobwebs off their clubs after a winter break, there was some great
scores. One in particular, helped by a fabulous hole in one on the 13th. Well

done Roger Pearson and thanks for the drink afterwards.

Here is the latest update of the Winter League results:

Here is an update of the Winter League results:

Attached are the results and standings so far.

Attached are the current positions from the Friday morning rounds of golf.

To see the penultimate update, please click on the link below:

BPGC Scratch Team have won promotion finishing second in the league – Well done to Captain Ben Kaye and all the Scratch Team Players.
The Handicap Team have maintained Division One status finishing the season in third position. Well Done to Captain Mick Hanson and all the Handicap Team players.
Unfortunately the Rabbits finished bottom of the league and will get relegated to Section D – Commiserations to all.
The Seniors finished top of their Section and qualified for the knockout competition for the first time ever. Unfortunately they lost against Huddersfield with a game that went to the final match and the final hole (18th) before the result was decided. Well done to Roger Pearson – Seniors Organiser – and all the players who participated throughout the season.
Juniors finished second from Bottom in a very tough league.
Bradley Park Team Results – August 2017

Attached is an update.

Here is the first update of this year’s competitions:

Congratulations to the men’s Championship winner, Ricky Hemingway with 150. The runner up was Danny Moville.

The winner of the J W Taylor Millennium Crystal was Graham Hollingdrake  with 137 – congratulations and the runner up was Andy Davison with 138.

The 8-15 Cup winner Graham Hollingdrake was 153 and the runner up was Barrie Martin.

The Rabbit Trophy winner was Harry Dews with 176 – congratulations.

In the Ladies Championship, Linda Bemrose was the winner and also completed the double by winning the nett Jubilee Cup. This is the second consecutive year she has won both. Congratulations!.

Please see the attached for the May team results.

In the HHDRGA Rabbits Foursomes  – Mellor Trophy – Peter Higham and Cliff Froggett progressed to the next round following a 19th hole win against Queensbury.
In the Rabbits Singles – R.T. Morley – Ben Page has progressed to the second round following victory in the first round.
In the Lawrence Batley Seniors Individual Matchplay Championship both Roger Pearson and Graham Hollingdrake have progressed through two rounds to reach the quarter finals in their respective sections of the competition.

Our second Junior League match was at home v Crosland Heath. Crosland Heath brought a strong team of low handicap juniors. Our Junior Captain, Rhys Haywood played some brilliant golf to come back from 4 down to win the match against a 4 handicapper. James Sweeney, handicap 21, also fought back valiantly from 3 down to draw his match against an 11 handicapper. Well done to Michael Edwards and Damian Cockroft, even though they lost their matches, they gave their low handicap opponents something to think about.

The first league match of the season was away at Meltham on the 28th April. The final score was 6 points to Meltham and 2 to Bradley Park – congratulations to Damien Cockcroft who won his debut league match with a solid display of straight hitting and confident putting.

Well done to all that took part against some tricky opposition on a difficult course.

We also welcomed Michael Edwards to the junior league team as he played his first match as a congu handicapper.

James and Connor both fought back from 4 down and narrowed the gap to 2 but unfortunately, Meltham were a little stronger than us on the day.

Gabriella played a friendly match over 10 holes. This was a great experience for her and she played some great golf to beat her opponent. I’m sure she will soon be knocking on the door of the junior league team.

Congratulations to the winners of the Steve Brook trophy: Hugh Shannon, Cliff Froggett & Ben Page with a score of 81. They beat Martin Shaw, Ricky Hemingway and Mick Hanson on a back 9 count back.
The event was supported by 20 teams which was well above the usual for this competition.
Thanks to all participants.
(Michael Waddington)

The Rabbits have been playing in the YRGA knock out – the Fowler trophy. Roger Pearson and Cliff Froggett went to Bawtry and lost at the 1st extra hole. Bob Balcam and Ben Page beat Lightcliffe at home.

We are coming to the end of the competition for this year. The Trophy will presented based on results up to and including Friday 24th, but we will continue to hold Friday socials through until the beginning of the Seniors league in May, starting again in mid August.

A score of 245 looks to be the benchmark for getting into the final and there are at least three pairs who could yet upset the apple cart. There are just two weeks to play those final rounds.

Here is the latest update of accumulated scores received from Cliff Froggett.

To see the latest results and accumulated scores so far, please click on the link below. Any queries, please see Cliff Froggett.